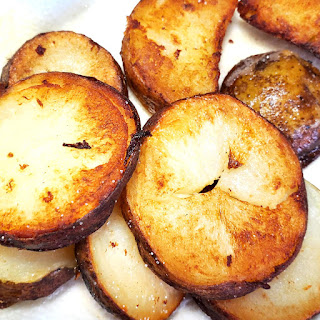 Whole Boiled Sliced Potatoes were served with dinner two nights ago.  They were good but not really what I had in mind when the side dish was created.  With two remaining whole boiled potatoes in the fridge, tonight a second attempt was made with a completely different method.

Instructions:
To warmed bacon grease (enough to fully cover the bottom of cast iron skillet) potato slices were lined without touching and fried crisp.  Once flipped and fried to a golden brown on the second side, the potatoes were placed on a cookie cooling rack (to allow to cool without becoming soggy) and sprinkled with salt.

Scaled for Likability: Good
Better but still not what I had in mind.  These are crispy on the outside but they are still dry on the inside.  Am beginning to think the potatoes were over boiled to start with....