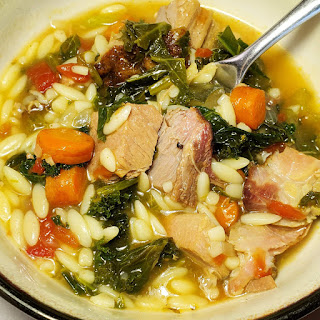 Couple of days ago a wild pork shoulder was BBQ and served with potato rolls and a cold bean and corn salad.  Everything on that meal turned out just fabulous, like I knew how to cook.  There was just enough leftover pork for two sandwiches but not three, even if served with sides.  Needing a meal to use up the pork and enhance its flavorings, a Healthy Pulled Pork Soup was served.
Modifications Made:
Recipe was halved.  Stock was a combination of two cups chicken broth, two cups beef broth, both from a bouillon cube.  Zucchini was omitted. One tablespoon of minced garlic and one cup uncooked risotto was added.  Cubed leftover BBQ pork replaced shredded pork.
Scaled for Likability: Great
The table counterpart worried the entire time the soup gently cooked that the final results were going to be overly smoky.  And by the smell of the soup, I was worried myself, too.  However, once the soup flavors cooked together, the smoke was only noticeable in the pork itself.  Barely.
Next time, broth would be increased to six cups to offset the usage by the risotti and the pork would be cut into smaller chunks.  As with all soups, this would have even been better made the day before, stuck in the fridge over night, and served the next day or two later.