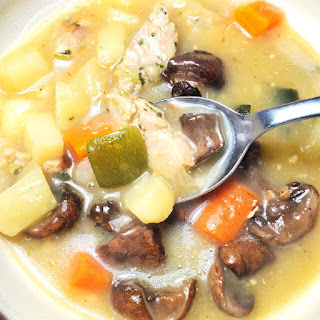 Five days into the Month of the Soup.  Two soups served, one old, one new, both winners.  Wonder if Hearty Ground Turkey Soup with Vegetables will keep the winning streak?

Modifications Made:
Bacon omitted.  What?  I know, how unlike me.  Chicken feta sausage for the ground turkey.  Spinach omitted.  Crimini mushrooms replaced instead.  One tablespoon garlic and three tablespoons of flour added.

To a large dutch oven, chicken sausage was browned whole.  Once cooked, links were set aside.  To fat, onions, carrots, and mushrooms were added and quickly soften.  Garlic was added along with flour.  Flour was allowed to evenly coat veggies and slightly brown before chicken stock was added (yes, from cubes).  Cooked bits were scrapped off, sausage was halved, diced, and returned to stock along with one cup frozen zucchini and three cups diced potatoes.  A dash of red pepper flakes, one teaspoon of black pepper , and soup simmered on low until veggies tender. Stir frequently and adjust seasonings adding water or broth, if needed.

Scaled for Likability: Good
Cream based soups without milk are never as full in flavor.  Sure the flour acts as a thickener but the milk holds the ingredients together.  If zucchini needs to be added to fiber into soups, from this point forward, I am going to consider pureeing and adding as stock.  Soup zucchini's always result in chewy mush.  Gross.

Next time the soup is made, ground chicken will be used instead of sausage for a different meat texture, zucchini will be left out or pureed, and green beans or corn will be added for more color.