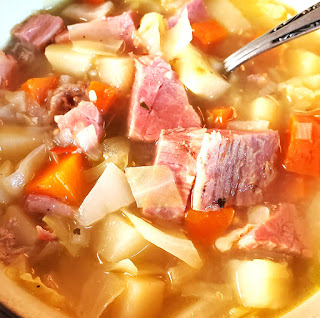 Three for three on soups, let's keep the streak going....

Last year a corned beef was cooked and when sliced in half to eat, the meat was fatty and tough.  Knowing the meat needed more time to cook but not having the time to put back in the oven, all cooking liquids and cubed corned beef was tossed into a pot along with whole carrots, halved potatoes, and quartered cabbage.

Modifications Made:
Meat was cooked as instructed per package instructions.  Once done it was set aside to cool.

Scaled for Likability: Great
So many flavors combined to make a light yet filling soup that is not cream or tomato based.  Even if the meat had been used just for sandwiches and only the veggies were cooked in the meat liquid, the soup would be tasty.  When serving, be sure to pair soup with an extra toasty slice of buttered dark rye bread.

Edit Feb 8, 2021:
Leftover soup was consumed today.  Beef was very tender and potatoes kinda fell apart creating a thicker soup base.  Was very good!  Something to consider for next time....