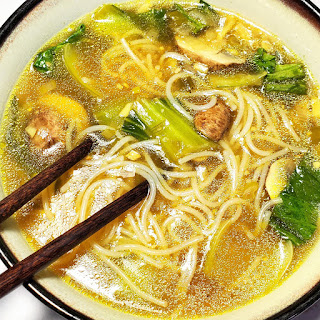 Can't win them all.  With last's night cheesy fail, today I wanted a soup light in stock and chocked full of veggies.  Ginger Garlic Noodle Soup with Bok Choy fit the bill.  And it was easy to boot!

Modifications Made:
Thin spaghetti noodles were used instead of rice noodles, sesame seeds were omitted, the entire green onion was added at once, and red pepper flakes were added to the stock instead used as a topping.

Scaled for Likability: Grood
From first bite, I LOVED this soup.  The table counterparts would gladly eat again but will not actively ask for it.

Their loss.  Its garlicy, light, and tangy with a bit of heat from the ginger. Would be good with kale or chard instead of bok choy and would be good without the noodles, too.  My one word of advice, do not skip the star anise.  Its' flavoring is the backbone of this soup.  So good!