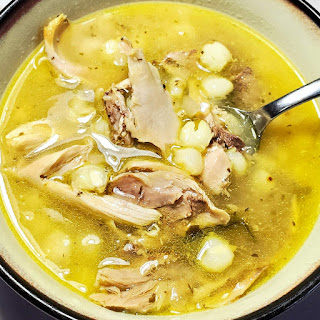 Broth based soups are some of my favorite soups. Heavy cream based souls are rich and filling but often times over power the soup itself. Tomato based soups are always too tomatoey. Chicken Soup with Lime and Hominy is a perfect example of a broth based soup that fits this table best.
Modifications Made:
Four chicken thighs were boiled in a pot with one small white finely, diced onion, one tablespoon minced garlic, one halved large jalapeno with seeds removed, broth from hominy, one small handful chopped cilantro, one heaping teaspoon comino, and one chicken bouillon cube. While thighs cooked and deboned, hominy and lime juice was added to pot along and heat was decreased to a simmer. Thighs returned and soup allowed to rest for 30 minutes before serving. Cheese was omitted.
Scaled for Likability: Great
There is something so down to earth, soul filing, heart warming about hominy. Even with a soup as simple as just chicken and hominy, flavors are well paired and taste buds are made happy. The soup was slightly thicker than just broth from the use of the hominy broth, rich in corn flavor, smoky from comino (a great addition), and just enough heat from the jalapeno to tingle the tongue without causing the nose to run.
Being a cheese fan for most anything (tacos, spaghetti, burgers, dogs, sandwiches, pizza crust, bread, veggies, apples, you get the pic...) cheese would not have paired well with soup. However, so similar in ingredient to Front Seat Pozole sliced radishes, fresh cilantro, or diced avocado would have paired perfectly.