Should Have Bread Rolls 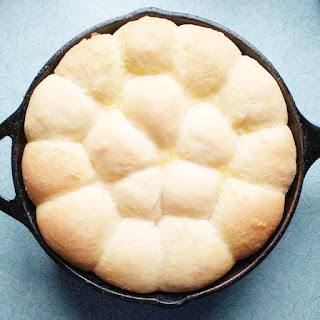 Another frozen day another meal planned based upon what's available.  Dinner was modified Beans and Fideo Soup and dessert was Soft Dinner Rolls instead of lemon bread.  Yes, dinner rolls.  They were actually served with lunch but leftovers were warmed on the skillet and served with homemade Cranberry Jallyserves.
Modifications Made:
Not having power meant the entire recipe was made by hand.  A large bowl, a counter, and a sturdy wooden spoon.
Scaled for Likability: Good
These were soft and fluffy on the inside but the sides and bottoms got too hot in the RV oven in a cast iron skillet.  This always happens with my breads and biscuits, too.  If the bread is cooked to perfect bottom temp, the insides are not done.  The issue lies with the ovens' inability to maintain correct temperature and not being able to raise the cooking rack far enough from the heat source.  Another issue was the pan was too small for the amount of rolls.  A 10" cast iron skillet is not the same dimensions as an 8x12 pan.  I think I would have liked these better if the rolls had more room to fluff before cooking.  Finally, the rolls had more of a yeasty bread taste than a fluffy roll taste.  Even so, these would be definitely be tried again when the power comes on, of course.