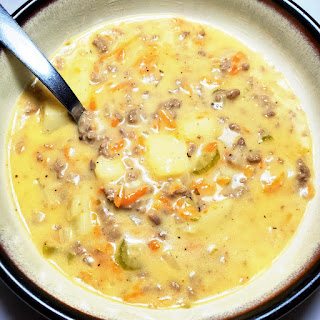 Standing in the freezing cold parking lot trying to decide on soups for the next three days leads to rushed choices and inadequate grocery lists. Looking through the list of 40 potential soups to serve Award Winning Cheeseburger Soup was one of the quickly decided upon soups.  I was skeptical about another cheese soup after Cheesy Potato Soup with Broccoli but this seemed more similar to a T&T cheesy meat dish served over chips than a new soup.  Safety in familiarity, right.
Modifications Made:
Recipe was reduced by half.  In case of failure like the broccoli soup, I did not want tons of leftovers.
Parsley was omitted.  Cheese was half Velveeta for creaminess and sharp cheddar for taste.
Scaled for Likability: Good
Maybe if the broccoli soup had been made with Velveeta it would have been better.  Very similar to the meat cheese dip but with color.  The potatoes were almost unnoticeable as compared to the meat and cheese.
Next time, the potatoes would be pureed for a thick base or even swapped out for two cups instant mashed potatoes already cooked, carrots would be cubed, celery and Velveeta doubled, and shredded cheese would be relegated to strictly a topping.  With the meat and the veggies, the Velveeta is almost indistinguishable.