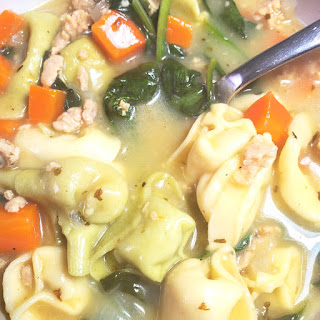 Having scored a clearance package of fresh spinach and cheese tortellini at the store, an easy pot of Creamy Sausage Tortellini Soup was made with a frozen package of spinach feta chicken sausage scored at half price a few weeks ago.  Double score.
Modifications Made:
Since the chicken sausage had feta and spinach, the links were boiled, casings removed, and sausage roughly chopped to attempt a recreation of crumbles.  If sausage had been cooked in crumbles first, the feta would have burned.  Water from the boiled sausage was kept for later usage in the soup as the water base for the chicken bouillon cubes.
Shallots, extra salt, and italian seasoning were omitted.  Half and half was replaced with two tablespoons of flour added once the onions, carrots, and garlic were softened.
Scaled for Likability: Good
Too many flavors.  The soup would have been just fine without the sausage as the tortellini was filling enough.  Again, as with Vegetable Pot Pie Soup, the soup would have been just as good as a simple broth based instead of flour/cream based.  Then without flour/cream, breadsticks could have been served!
On a side note, if making this dish be sure to spend the extra pennies on good quality torts.  This house brand lacked depth of flavor both in the pasta itself and in the cheese filling.  Very plain torts.  So sad because their frozen variety is excellent.