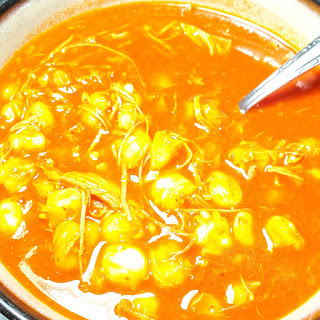 Three winters ago it was cold and miserable for weeks on end.  Inspired by the bone chilling days, lots of soul warming soups were made.  Most were T&T recipes but the one soup that stood out the most was Front Seat Pozole.  At the beginning of the cold snap a cauldron of Pozole Rojo was made.  It took all day to prepare, required new and interesting ingredients never cooked with before, and it smelled fantastic.

Smelled being the keyword in the description.  Pozole Rojo tasted horrible.  Bitter, almost rancid.  An entire cauldron soup containing three pounds of pork shoulder and one #10 can of hominy wasted.  Completely inedible.

Not having garbage day for a week, the entire pot was placed in the front seat of the truck for safekeeping against critters and to open up space in the fridge for more soup.  Good soup.  With temperatures not above upper 30's for a week, the soup sat in the truck and chilled.  Trash day came and when the truck door was opened it smelled of wonderful Pozole Rojo.  How could something smell so good be so bad?  Before the entire pot contents were trashed a small bowl was warmed and taste tested again.  Just to be sure, right?

Right it was.  Sitting for close to four days in the front seat of the truck in freezing temperatures transformed the soup into some magical.  It was savory and smooth, rich and hearty, and filled with tender morsels of pork and chewy bits of hominy.  It was fabulous.

Modifications Made:
None.  The entire recipe, including the Red Chili Sauce, is made exactly as written.

Scaled for Likability: Great
In reading the original recipe somehow I missed this simple note from the author: "This recipe makes quite a bit of pozole, actually a lot. If you do not have a small army to feed then I’d recommend you half the recipe."  A small army of food is an understatement.  In cooking the soup, the recipe was halved and this table still ate on it for three days.  Luckily after the initial tasting, the soup only got better each and every time it was reheated and served.

Over the years, I finally did figure out what went "wrong" on the first batch of Pozole.  When making Red Chili Sauce, the original water from soaking the peppers was used in the blending process instead of fresh water.  After reading many recipes on various red chili sauces, it is common belief this boiled water takes on a bitter tone from the dried peppers.  I can only assume after Front Seat Pozole sat in the truck for all those days, the bitter undertones of the pepper water mellowed over time allowing the chili flavor to come through instead.

On a side note, here we are the first of February and the earth has gone hot.  Hot, hot.  As in summer hot.  For three months, February has been planned as Month of the Soup because historically February is our coldest month.  Pozole was made last week Thursday when the weather was still cool and stored in the fridge for serving today.  Lo and behold what is today's temperature: 63℉ with a heat index of 67℉, almost too hot for soup. 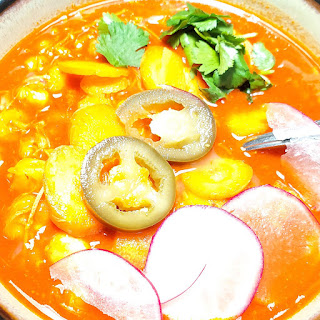 Edit Feb 2 2021:
Well today was not as hot as it was yesterday with a temperature of 62℉ and a heat index of 65℉.  Still too hot for soup! Front Seat Pozole was served again today but fully loaded on the toppings (thinly sliced carrots/radishes/avocado, cilantro, canned jalapenos, and lime juice.

Edit Feb 3 2021:
Forecast predicted todays weather to be very warm and they were right: 72℉ with a heat index of 73℉.  Knowing ahead of time it would too hot for soup at dinner, a small bowl of Front Seat Pozole was served today with a topping of rice for lunch.  Rice is NOT a suitable topping for pozole.  Stick with the veggie toppings, lots of thinly sliced veggies.

Having consumed all the pozole on table can handle, three half gallon bags were frozen for later easy dinners.