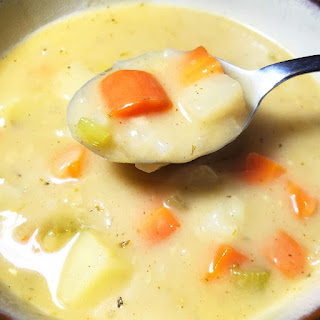 Using Instant Pot Potato Spinach Soup as a starting platform, a flour based vegetable soup was made with the simplest staple ingredients in less than 30 minutes.
Modifications Made:
Parsley and spinach were omitted and low-sodium vegetable broth was switched for full sodium chicken broth.  Cashew cream sounds disgusting on any platform but especially soup.  Once veggies were soft, two tablespoons of flour was added and cooked for one minute or so before broth was slowly added.
Scaled for Likability: Good
Would have been better without the flour based and just left as a simple veggie broth soup.  If a filler was needed, adding a simple half cup of rice or noodles would have been better than the flour.  Tasted like chicken pot pie without the chicken or the pie.  Bummer.
Would I eat this again, yes.  Was it worthy of a romantic, freezing my ass off Valentines day dinner, no.