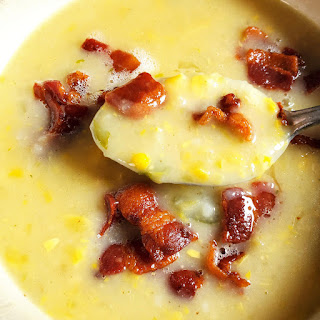 Can't believe The Month of Soup is over.  With arrival of the last day, I discovered there were so many soup recipes uncooked.  Some were previously tried recipes like 16 Bean Soup and PoFolks Stew. Some were new like Black Bean & Butternut Squash Chili (Vegan) and Mexican Meatball Soup.  Being the last day of the month, I thought it was only fitting to serve a new recipe Summer Corn and Zucchini Chowder to keep in with Eating Waffles new recipes routine.  And because it had bacon. Cause why not?

Modifications Made:
Parsley and thyme were omitted, milk was reduced by half, and bacon was doubled.  Zucchini was added to the corn for additional browning and cooking.

Scaled for Likability: Great
Man oh man, what a way to end a month of soup.  This was freaking fabulous, even with zucchini.  More pepper was needed along with more of a thickener to create a chowder consistency.

Next time, the zucchini will be cooked directly alongside the onion and celery and all three along with two tablespoons of flour will be blended smooth adding water to create a pourable base.  This will be returned to the pot and the remaining step will be followed as written.  Cheese would have been great.  A white cheddar or a super sharp yellow cheddar and those little oyster crackers for extra crunch. All the flavors of summer on a cold winter's day. Delicious.