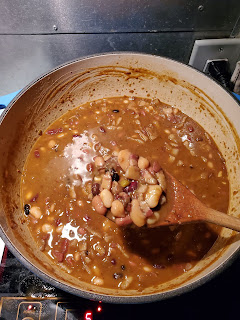 In continuing with the meat free dinners and having perfect weather for soups, tonight was another easy dinner: 16 Bean Soup.  Unlike the previous soup dinner, tonight there was bread!  Not crunchy artisan, but soft loaf bread to soak up the wonderful bean base.

Modifications Made:
To soak or to not soak?  As per the instructions to soak or flash soak, neither was followed as long ago I gave up either method.  Instead bacon and onion are cooked till soft, then beans are added with seasonings (or in this case the season packet), covered with water and cooked to desired consistency.  In measuring water it is better to lean on too little as water can be added but not removed and I prefer thick bean soup.

Scaled for Likability: Great
What is not to like about 15 bean soup? Especially one that comes with a premeasured tasty season packet that is neither too salty or too spicy. Many years ago I am convinced this used to be a 15 bean soup but either way, one more or less bean, this soup is perfect tonight, tomorrow, and even two or three days from now.  It is as a soup should be, it betters with age.  Delish.