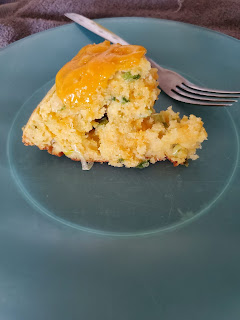 In having leftover beans for dinner but still needing to fill my new recipe requirement, I choose Jalapeno Cheddar Cornbread as an alternative to my standard trusty T&T cornbread recipe as I was wanting something spicy not sweet.

Modifications Made:
Cornbread is one recipe I never vary from as the results are always disastrous.  Any change caused the cornbread to be too soft, too hard, undercooked, overcooked, etc...  Nope, all cornbread recipes are followed to the letter with one exception. Cornbread is always made in a preheated 9" cast iron skillet.  Using a preheated cast iron skillet results in a toasty crunchy bottom and sides for all six slices.  There is no center cut in a circle!

Scaled for Likability: Fail
Using yogurt as a replacement for oils and as an added moisture ingredient works fabulously in many, many recipes.  Cornbread in not one of them.  Yogurt undertones combined with cheese and jalapenos do not mix.  In fact, I think even if I made this as plain cornbread the yogurt would override the cornbread and still result in a too soft, almost soggy bread.  Cornbread is supposed to be slightly dry so it will soak up all the good stuff: beans base, chili, honey.  All table participants attempted several bites and were quickly apologizing for the waste.  What's worse, there was no tasty bread substance to soak up bean base! Boo-hoo. Should have stuck with my T&T cornbread recipe.