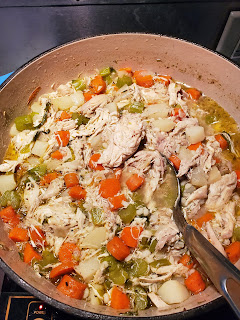 Still on overload of meat from the family holiday visiting, I found myself leaning towards a non meat dish when I stumbled across Chicken and Barley Stew.  Containing loads of veggies, hearty barley, and just enough meat to satisfy the table counter parts, I had to give it a go.
Modifications Made:
As with most chicken recipes, I started out with a whole chicken boiled and de-boned creating a rich tasty stock for the stew.  With the stock and chicken removed, the onion, celery, and carrots were added to the pot to saute in 2 tablespoons of butter instead of wine with quantities increased to match the poundage of chicken boiled.  From there on the rest of the instructions were followed as written.

Scaled for Likability: Great
For whatever reason, if the recipe states it is going to be a stew, a soup, or a stoup I can never get the recipe to be turn out like the pictures.  And let me tell you, the pictures on the blog where this recipe was discovered are just beautiful.  My picture shows an edible meal.  Aberdeen's Kitchen shows mouth watering, award winning food pictures.  Just GORGEOUS.  Seriously, go check out the pictures.
Back to the point: too much filling not enough stock. This was a result of cooking an entire whole chicken and increasing the veggies to match.  While the entire chicken was not used as a whole quart bag was saved back, the remaining amount was still too much.  The end product turned out more like a fancy version of my chicken and rice dinner than a soup, stew, or stoup.  Thick as it was and lacking in juices, the stew(ish) was over the top fantastic with the wholesome, earthy flavors of the carrots, celery, and barley.  The potatoes and chicken were added bonuses.  Sadly, the original post showed spoonfuls of heavily laden barley stew.  Mine, not so much.  Barley was there but more like as in an after thought, not as in the main base.  All in all, even with the result looking nothing like the original post, the recipe was so good, it will be added to the T&T meals.  Score!