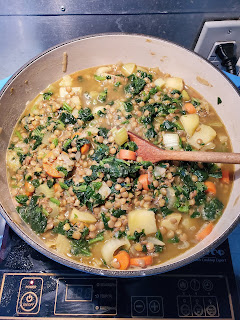 Still suffering from meat overload and having such success at a meatless dinner last night, tonight I decided on a Smokey Lentil and Potato Soup.  With carrots, celery, potato, spinach, and lentils what could go wrong?

Modifications Made:
Originally designed for an Instant Pot or Pressure Cooker and not a fan of either, this soup was cooked like all soups or stews before: low and slow in a 6qt dutch oven.  Other than two other substitutions (Hungarian Paprika for regular paprika and two cups of brown lentils in place of red and brown lentil mix), all other ingredients and their quantities were followed as written.  With exception to spinach, once the onions were thoroughly sauteed, all ingredients were tossed in at once and cooked to perfection, just slightly al dente lentil.  Spinach was added the last five minutes or so of cook time and the soup was allowed a 20 minute rest time before serving.

Scaled for Likability: Great
Don't really know where the "smokey" came from in the original recipe but the substitution of the Hungarian paprika was a great choice as it pared perfectly with the carrots, potatoes, and spinach. In dicing of the carrots, potatoes, and celery, pieces were of all sizes allowing some to breakdown completely creating a thick, flavorful base. My only two complaints was I forgot to buy crunchy artisan bread.  A downfall to the recipe, sadly, was the 2 cup leftovers turned to mush and had to be tossed.  I figured like all soups, the second day would be even better than the first and was shocked at the complete breakdown of the lentils.  Bummer.  Not being able to save leftovers is not a break factor for saving the recipe, it just ensures artisan bread must be served next time as the recipe will be cut in half to reduce any waste.