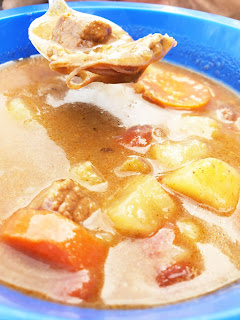 Growing up I despised stews.  It wasn't the fault of the stew but the stewmaker.  Venison was used instead of beef meaning the meat was both dry and tough, hunks of meat where always too large to chew, potatoes and carrots were either over done or worse under done, if the stew contained tomatoes they were always extra large as tomatoes were never cut smaller than quarters, and the stew sauce was bland.  It wasn't until just a few short years ago I started to appreciate the wonderful, full of flavor possibilities of a good stew.  Since then I have attempted several stews but none quite so utterly fantastic as Hungarian Goulash.
Modifications Made:
I am sure it has been mentioned before but in case you are new or in case you forgot, petite diced tomatoes replaced diced tomatoes as I don't like large chunks of tomatoes in anything.  Not stew, not salads, and especially not spaghetti sauce.  If there were tomatoes smaller than petite diced, they would be used instead.
Both of the Optional Ingredients were added.  One because every single picture showcased included both ingredients and two because a stew of just beef and tomatoes sounded gross.
Scaled for Likability: Great
A goulash it was not as it lacked ground beef and noodles but instead it was more along the lines of a traditional American stew.  A stew-lash.  An utterly FAN-TAS-TIC stew-lash!  No, this is not an exaggeration as everyone at the table loved Hungarian Stew-lash from the first bite.  Two bowlfuls later, each of us were miserable yet wanting more.
Thicker than normal stew from the flour and seasoned with the bare minimum of flavors, the stew was rich and deep in flavor filled with tender bits of beef and perfectly bite size vegetables well suited to soak up the heavy paprika seasonings.
What made this recipe not an American stew was the use of the paprika, specifically the Hungarian paprika.  When you make this, and you will make this straight away, DO NOT substitute or skimp or omit the Hungarian paprika.  It truly is the KEY ingredient to this stew-lash.  Omit the potatoes, omit the carrots, hell omit the tomatoes, but do not omit the Hungarian paprika.
Oh, and one other tip.  Make sure you have a large loaf of fluffy French bread to soak up the savory stew juices.  This is one of those stew/soups that would be most excellent if served in a bread soup bowl.  And as with all good soups/stew, it gets better and better every day it sits in the fridge.
Editor's Note: Today's dish is not exactly new as it was served once before just before the start of this blog back in October.  In making this dish today for the second time, not a single modification was made to the meal with exception to the addition of French bread.