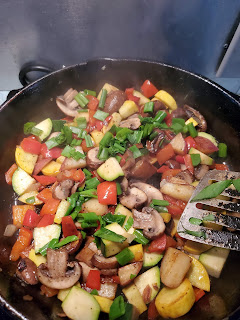 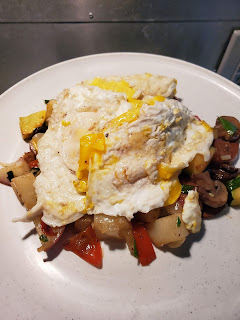 Hash.  Growing up this was something not exactly skillet hash browns and not exactly diced potatoes with veggies either.  It was gross.  There was simply not enough ketchup in the world to mask the flavor, the mush, the blandness.  As an adult, a lover of veggies, and someone who doesn't want nor need meat in every meal, I was hoping against hopes this modern version Bean, Potato, & Veggie Vegan Hash was better than the dratted memories of hash as a kid.
Modifications Made:
I really despise measuring of quantities, especially at early hours of the morning.  Instead of measurements, I used 1 potato per person, 1 whole zucchini, yellow squash, and red pepper each, and 1 box of mushrooms. Canned beans were left out all and replaced with two eggs each.  Veggie pieces were cut into large chunks to retain some crunch and to help avoid mush and all were pan fried desperately in bacon grease and then tossed together at the end with fresh green onions, salt, and pepper.
Scaled for Likability: Good
Not really a vegan recipe with the usage of bacon grease and toppings of eggs but I have to admit it was way better than my memories of kid hash.  Of course, the kid table counter part did not care for it as he is in the stage of life where if all meals served are not mac and cheese or hot dogs then meals are not worth eating.  Next time, russet potatoes will be swapped for yellow gold potatoes and a green pepper will be added along with a dash of spice seasoning for some heat.