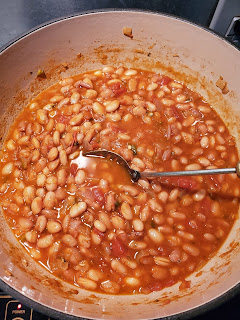 Beans are a staple in my T&T collection with favorites being black eyed peas and pinto as they require few ingredients.  When it comes to pinto beans, I refer plain-o-jane-o pinto beans as they are good the first day, even better the second day, and on the third day they can be made into refried beans or bean dip.  The family prefers charro beans for their flavor.  Charro beans however cannot be used for refried beans nor bean dip which means they can only be served as beans.  While I do enjoy a good bowl of charro beans I find their usefulness limiting.  This new recipe for Charro Beans was perfect as it was easily modifiable to a half bag of beans meaning there would be very leftover little beans.

Modifications Made:
All ingredients were reduced by half.

Both the chipotle pepper in adobo sauce and the bay leaf were left out as a Mexican flare bean was desired.  Chipotle and bay leaf is not a South Texas Mexican food ingredient so one tablespoon of chili powder was added in exchange.  In prep, the beans were not soaked. Onions were sauteed in bacon grease until translucent.  All ingredients were added and cooked until desired tenderness.

Scaled for Likability: Good
The problem with charro beans is that it is like brisket.  Taste and cooking method is left to the chefs preference.  These charro beans needed less stock as they were soupy, more heat, and fresh tomatoes instead of canned tomatoes.  Soupy beans are good if being served with cornbread in a bowl.  To offset the mild heat from a jalapeno, a whole Serrano pepper should have been added to offer more heat without excess pepper pieces. During cooking the canned tomatoes completely fell apart during cooking resulting in a weird texture to the broth.  Fresh tomatoes fall apart during cooking too but they don't result in a mealy texture to the broth.  If served at a party, I would eat the beans and say they are good.  Cause they are good.  They are just not what I had in mind for my charro bean collection.  To each their own.