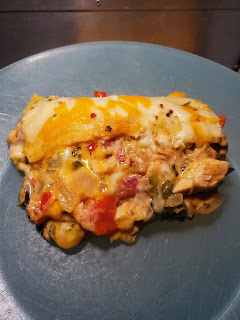 Growing up, King Ranch Chicken was a staple at every party/get together/wedding/funeral/neighborhood gathering/potluck both near and far. Served in a standard 9x13 casserole dish, it came in many varietions but all included chicken and two cans of condensed soup. Chicken would vary from canned, breasts only, thigh only and soups flavors would vary from mushroom, chicken, celery, to some combination of both.  The rest of the ingredients came and went as the location changed: peppers, onions, jalapeno, cheeses, sour cream, milk, half and half, peas, pimentos, tortillas...  Every one I know has a King Ranch Chicken casserole nightmare story to tell.  Expect me as I have never had it until this past summer when I stumbled across this King Ranch Chicken casserole.  What a game changer.  Not quite a T&T recipe as it so new, it is definitely a staple which I will continue to modify until my perfection is reached.

While chicken is cooking, oven roast two pablano peppers until skins are black and crispy.  Cool in ziplock bag.  Remove skins.  Dice and set aside.

Simmer on low to cook off excess chicken stock.  Salt and pepper to taste. Turn off heat and add 1/2 cup of sour cream to chicken/veggie mix and stir to well combined.

In the center of an 8x8 pan, lay down one whole corn tortilla.  To cover edges, lay down half corn tortillas with their flat edges facing the pan, two per side.  Covering the edges will use eight corn tortilla halves.  Spread with chicken/veggie layer.  Sprinkle with cheeses.

For second layer, lay down one whole corn tortilla in the center of pan.  To cover the edges, place one flat edge of a corn tortilla half to touch each of the four sides.  This will leave the corners of the 8x8 pan empty.  Use four of the quartered corn tortillas to fill in the gap.  Repeat with chicken/veggie mix.  Sprinkle with two cheese.

For the top layer, repeat corn tortilla steps from the second layer.  Cover liberally with two cheeses. Not all chicken/veggie mixture will fit as the original recipe was a 9x13 pan.  However, all the cheese will be used.

Bake at 350 for 20 minutes or until bubbly.  Cool for 10 minutes before cutting.

Scaled for Likability: Great
Since last summer I have made this recipe three times and everytime it gets better and better.  Originally, regular white corn tortillas were used.  To help with the heaviness of the stuffings, thick homestyle corn tortillas are used.  Next time, the ratio of cheeses will change with more monterry jack and less cheddar.  For the few lucky ones who have been served this meal, they all agree it is better than the condensed soup versions.  Of course, with all things that take this kinda of time, they are always better than the 30 minute quick and dirty recipes.  Some recipes truly cannot be created on shortcuts while retaining their integrity of flavors.  The textures are wonderful and, the homemade "flavorful" stock makes for a rich base when mixed with sour cream.  Having a thick mixture of chicken/veggies ensures the tortillas don't get soggy while cooking and using preshreded cheeses with their potato starch coatings helps to thicken the mixture while the dish bakes.  What is better than all this tastiness?  The dish saves and reheats in the microwave fantastically!  In fact, I would say the dish might even be better the second day.  Yes, the dish does take some time to make, but if it you used a 9x13 pan and served with Spanish Rice, there would be left overs ensuring a couple of nights of cook-less evenings.  Perfect meals, perfect leftovers.