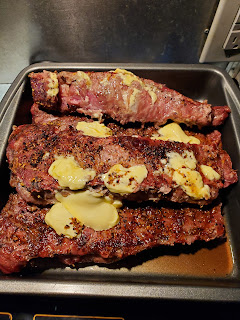 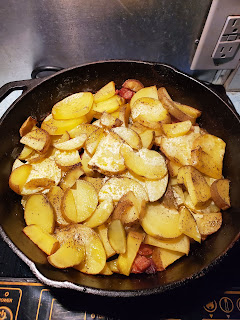 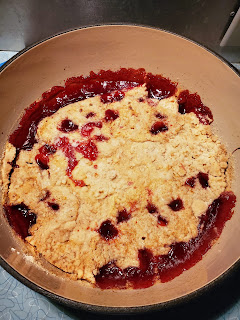 Last night was a free dinner pass.  Pizza with friends.  Tonight, to make up for lost meals, three new recipes were tried: Steak with Butter, Buttery Bacon Potatoes, Cherry Butter Cake Cobbler.  Of the three new recipes, desert was the only one following a specific recipe.
Modifications Made: Buttered Steak
Steak with butter did not follow any one recipe, more just the idea of a butter enhancement.  Many recipes call for butter pats flavored with lemon, garlic, and parsley to enhance the seasonings on the steak.  This just seemed like too much flavorings as we typically heavily season our steaks anyways.
Modifications Made: Buttery Bacon Potatoes
Buttery Bacon Potatoes was simply bacon fried extra crispy, thinly sliced potatoes seasoned with salt and pepper added to crispy bacon, and butter splats added to tops of potato slices cooked in a covered skillet until potatoes were soft.
Modifications Made: Cherry Butter Cake Cobbler
Not wanting to experience ash in campfire cobbler, the cobblers' four ingredients were combined as instructed and then baked in the oven at 350 until brown and bubbly.
Scaled for Likability:
Buttered Steak: No Thank You
Buttered steak may be all the rage on Pintrest and food blogs across the land except at Eating Waffles. Here we like our meat seasoned, grilled to perfection of pink, with crispy crunch of grill on the outside with a soft, velvety inside.  Butter is for potatoes.
Buttery Bacon Potatoes: Good
As it turns out, no matter how crispy the bacon is  to begin with, once cooked with lots of butter and potatoes who are then steamed to perfection, crispy bacon inevitably gets soft and chewy.  If I had wanted soft, limp bacony potatoes, raw bacon bites could have been cooked alongside the potatoes.  Next time, crispy bacon will be tossed in directly before serving to preserve all crunch.
Cherry Butter Cake Cobbler: Fail
Dutch Oven Campfire Cobber was a total wash.  The batter was so sweet it made me and my table counterparts teeth hurt. Even in attempts to pick out the cobbler filling was a waste of time as the batter seeped into all of the parts ruining the entire dish.  Maybe it was the cheap box cake, maybe it was just our taste buds.  But to have a 12 year old child who won't eat desert says something about the desert.  D-EEEEE-SGUSTING! To the compost bin the dish went.  Happy eating chickens and other eaters of the bin....
Three strikes, your out. Better luck next time. Maybe.  Hopefully.  If not, this whole 365 days of new meals might have to be scratched.