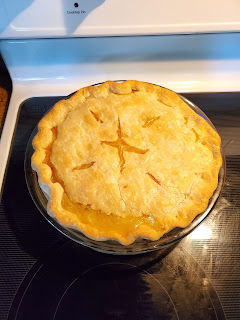 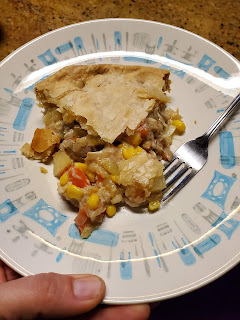 Chicken Pot Pie.  An all time classic American dish taken to new levels via Marie Callender.  Having never actually eaten it fresh at one of the chain restaurants, my table counter parts are frequent partakers of her frozen pot pies.  The extra large serving, that is.  In all my years of cooking, I have never once made homemade chicken pot pie.  Chicken Pot Pie recipes are not easily reduce in serving amounts to feed only three people nor do they reheat well the second day unless they are baked again.  Baking once is time consuming enough.  Baking any meal for leftovers is not a viable option.  Visiting family was the perfect time to remedy.  As an added bonus, grandma has a full size oven large enough to cook two pie at once unlike my tiny compact oven which doesn't even hold an 8" x 12" cookie sheet!
Modifications Made:
This recipe was simple enough to follow, called for basic pantry staples, and the best part was the recipes used store bought pie crust.  Perfect! Only three modifications were made to the recipe: a whole fresh chicken was boiled in heavily onion and celery infused water and then deboned.  Using only chicken breasts could result in dry, tasteless stuffing.  Once chicken was removed to cool, diced potatoes, carrots, and celery were added to broth to cook.  Peas were omitted and corn was added.
Scaled for Likability: Good
After having made the recipe, I now understand the reasoning for breast meat only, cubed on and cooked with veggies.  Deboning the chicken when still warm and then mixing with veggies caused the chicken to shred.  Shredded chicken is not classic pot pie consistency.  All parts must be diced to the same size for even cooking.  However, I would not change the meat for breast only.  I would just change the order in which the chicken process followed.  Chicken would be boiled, cooled (or refrigerated overnight), then cut off the bone ensuring larger chunks of meat.  Larger pieces would then be diced accordingly to size.  I say with certainty using homemade chicken broth added a much deeper flavor to the recipe than what was instructed.