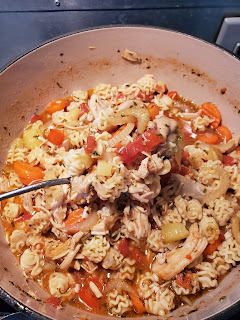 Chicken noodle soup is always the same.  Chicken, noodles, seasoning.  What is added is the really the only variant.  Wanting chicken noodle soup but not wanting the classic thin spaghetti with chicken chunks, I settled for Sicilian Chicken Soup.  Originally found at Carrabbas Italian Restaurant, I cannot attest to the similarity in taste as I have never eaten at Carrabbas. What I can attest to is that is not your canned chicken soup.  This is a thick and chunky, adult chicken soup for the soul.

Modifications Made:
Flat leaf parsley was omitted during the cooking process.  Frozen carrots replaced fresh and were added to the stock to warm once the chicken was removed to debone.  Radiatore pasta replaced ditalini pasta and I skipped the mashing of the potatoes all together.

Scaled for Likability: Good
In making of the pasta, I mistakenly added the entire 16oz box of noodles instead of 1/2 pound as the recipe stated.  This resulted in WAY too many noodles for the soup.  In making again, I would change two instructional steps: add more water than what was called for in the recipe as this is supposed to be a soup and I would add a tablespoon of butter directly before serving to add an extra level of savory to the dish.