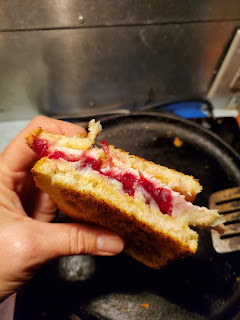 A new year tomorrow, already.  Where did the time go?  What a better way to round out the year than with a Turkey and Cranberry Panini.
Ingredients:
White Turkey, sliced thick
Homemade Cranberry Sauce
Swiss Cheese, sliced thick
Potato Bread
Butter
Instructions:
Butter both side of bread.  While toasting on skillet, warm turkey in microwave and let cheese and cranberry sauce come to room temperature(ish).  With one side of bread toasted, flip to toast second side and add warm turkey slices on one half and cheese to the other half.  The moisture of the turkey and cheese will slightly soften the crunchy toasted layer.  This is OK as the other half of the bread is still toasting for the crunchy layer.  When second side of bread is toasted, add a generous layer of cranberry sauce.  Combine two side, slice in half, and enjoy!
Scaled for Likability: Great
Technically a panini is not made on sliced bread but one has to use what one has access to at the local chain food store.  Italian bread is not going to be, unfortunately.  However, I found the sweetness of the potato bread a great addition to the overall flavorings and given the chance, this "sandwich" would be made again exactly as it was the first time.  Perfectly flavorful BBQ turkey combined with just enough tang from the cheese to offset the sweet of the ever so fabulous cranberry sauce (which leftovers are quickly running out).  The only flaw with dinner was not having enough turkey to have second sandwiches.