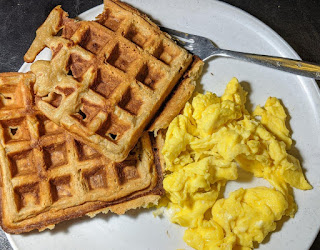 At almost half way though the year of no repeat meals and I am finding myself still enjoying the challenge.  But with that, life is life and life doesn't always flow the same.  A new meal post was missed yesterday, again.  It happens.  Leftovers, friends with dinner, late nights at work.  Life.  To make up for the missing new meal yesterday two new meal were made today.  First with breakfast, then with dinner.

Last month, five new waffles recipes were made.  Some of those have been made again, some scratched all together.  Needing a new waffle recipe to add to the collection of flavors tried (hashbrown, zucchini), apples were chosen today.

Not having ever placed whole bits of fresh fruits in the waffle maker, I steered away from apple chunks to applesauce.  Loving the flavor of apple cinnamon instant oatmeal, I combined the following two recipes Homemade Apple Cinnamon Waffles and Vegan Apple Cinnamon Waffles in an attempt to recreate this childhood favorite breakfast, but in waffle form.

Modifications Made:
Based upon experience waffle making from a box, one cup of any flour will not produce enough waffle for this table.  Even when served with eggs.  The modifications below were doubled.  I mostly followed the non vegan waffle options but used the vegan alternatives as necessary.

Combine: The dry mix was stirred into the wet mix until very well incorporated.  If the batter looked dry additional applesauce was added until the proper consistency was reached.  The batter then sat for 15 minutes to allow the oat flour to soften.  One additional stir was done before baking.

Scaled for Likability: Great
Oh so yummy.  Very crunchy outside, soft moist insides.  They were the best waffles ever.  When they are made again, the flour ratio will be slightly altered.  For the one cup flour, the ratio will be  three quarters oat flour and one quarter white flour.  Hopefully with this addition of white flour, the waffles will be a little more airy and not so dense.

The omitted dark brown sugar from the vegan waffles will be included in the next batch at about two tablespoons or sweetened soy milk will be used instead of plain.  With this sugar, no additional sugary toppings will be needed making these the perfect to go waffles.  If planning ahead for to-go waffles, two to three tablespoons of ground flaxseed would also be included in the batter.  What a plan: make extra, pop them in the freezer, toast when needed, and out the door.  Oatmeal, apples, flaxseed, all good things to carry you through the morning.