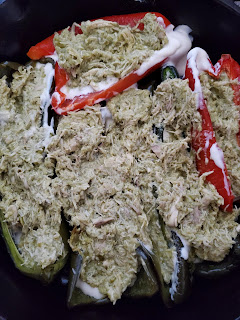 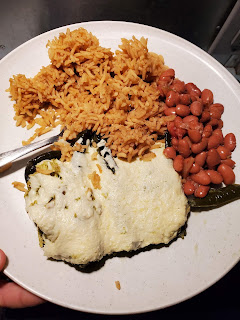 Leftover shredded chicken in green (tomatillo) sauce was sitting in the fridge beckoning to be cooked.  Green chicken enchiladas/chicken flautas had already been done, chalupas are the same as tostadas, and nachos are not too far off from chalupas.  Scrolling through some saved recipes I came across the typical stuffed peppers when inspiration struck.  Green Chicken Stuffed Pablanos.

Instructions:
Roast peppers in oven until charred on all sides.  Cool in sealed ziplock bag.  Remove charred skins.  Slice in half, remove seeds and ribs.

Warm chicken with sour cream.  Fill each pepper half with 1/2 cup chicken mixture and place inside same pan used to roast peppers.  Top with cheese.  Bake until cheese brown and bubbly.

Modifications Made:
Regular red bell pepper was used for teen counterpart.  The chicken flavor was good inside the pepper but the pablano was better.

Scaled for Likability: Good
Stuffed pablanos are better than stuffed bell peppers.  Pablanos have a much deeper flavor and a have nice tinge of heat.  If the peppers are too spicy, switch the pepper jack cheese for cheddar or even a mexican cheese such as Queso Fresco or Cotija.  The picture did not show it, but fresh cilantro and salsa were added atop rounding out the peppers as they were both fresh and cold to the warm, creamy chicken.