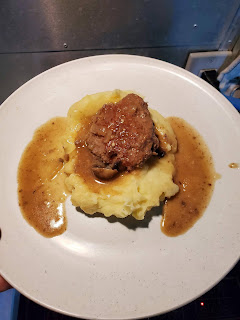 Growing up, Grammy worked in a kitchen at a huge church.  A church, mind you, she did not attend.  She worked random days and times depending upon the time of the year and calendar of events but never on Sundays.  School holidays were split between my two grandparents and based upon my Grammy's work schedule.  As I got older, I was allowed to follow her to work so long as I adhered to every child's favorite rule: OUT OF SIGHT OUT OF MIND.  So I went and stayed out of sight for the most part.  When kitchen doors were closed, except to the three other staff members, I was allowed to roam around and once old enough, be put to work.  There was really only so much a 10 year can do but I did master how to fold a linen napkin around a folk, knife, and spoon.

Memories of the work kitchen are fond and happy and my favorite days to work were rectory Wednesdays.  Every Wednesday the church priests, elders, etc would have their weekly meeting over lunch.  Never more than 10-15 present, it was like cooking for our family during the holidays but with a full size industrial kitchen.  The Wednesday group selected their meals and every month it included Classic Salisbury Steak in a Mushroom Onion Gravy over buttery mashed potatoes with green beans or a salad (depending upon the season) and soft yeast rolls.  Oh, how I LOVED Wednesdays!

Modifications Made:
Onions chopped for the meat patties were chopped to almost a paste format.  Onion chunks can lead to the meat crumbling when cooking or incomplete cooked onions.  Crunchy onions are not for Salisbury steak, they are for hamburger patties.

Scaled for Likability: Good
The meat was tasty and held together while cooking, the gravy was not too heavy with mushrooms and ample in quantity.  What more could be wanted?  Flavor development.

Two things need to be done next time to make this a more flavorful experience.  One, the meat needs more seasoning.  Lacking salt in the meat patty was completely noticeable. A teaspoon or two should do the trick to enhance the flavorings contained within the meat.  Meatballs always include salt, so why shouldn't meat patties?  For two pounds of meat, two tablespoons of Worcestershire was not enough.  Three to even four tablespoons would have been better.  Secondly, the patties need to simmer longer than 20 minutes. The next times these are made, the patties will cook for closer to an hour to allow the flavorings of the gravy to seep into the patty itself.

And speaking of gravy, at my table brown gravy never looks brown.  In theory I understand the concept of how to cook brown gravy as I can make a wonderful batch of white gravy.  But what I fail to accomplish every time brown gravy is made is correctly planning enough gravy for the meal.  As a result there is usually too little and one cannot simply add to brown gravy a raw flout mixture and allow for it to cook into the first batch.  When this is done, the brown gravy takes a white shade and the brown flavorings are lost.  There is a simple disconnect in my brain as making brown gravy is the same as making a roue for gumbo or a roue for red enchilada sauce.  Yet, every time brown gravy is made, it is a whiter shade of pale than a dark, rich brown.  Gonna have to master this as one cannot always rely on McCormick brown gravy packages.

Was this as good as Grammy's Salisbury Steak?  Not a chance.  Was it good enough to use as a starting platform to create a recipe for the T&T list?  Absolutely.