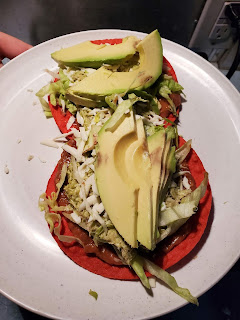 Strolling through a popular social media forum, a recipe channel feed was stumbled across where the host was making Tostadas de Pollo al Cilantro. Unsure as to what dialect of Spanish the host was speaking in did not matter as the video said it all: make Cilantro Chicken Tostadas now.  And I did.  And they were fabulous.

Modifications Made:
Clearly there was a translation error.  The written instruction state green tomatoes but the video show tomatillos.  Green tomatoes and tomatillos, which are green, are not the same.  The opening line of the written recipe says its a green chili sauce but there are no green chilies in the ingredients.  A salsa would have implied actual green tomatoes and a sauce tomatillos.  From the video, the meal was made more along the line of a sauce.  Like enchilada sauce. Once again, that would imply tomatillo, not green tomatoes.  Matters not, the recipe was made with tomatillos like a green enchilada sauce and everything else was the same.

As with most meals requiring chicken, a fresh chicken was boiled with onions, jalapeno, cilantro, garlic, lime juice, salt, and pepper until meat was falling off bone.  Except for the 1/3 cup of stock and 3 cups of chicken needed for the recipe, the remaining stock and chicken was saved for later usage.

Scaled for Likability: Great
Homemade tomatillo sauce is not new.  Have made several versions over the years in various states of heat and ingredients.  What was new about this recipe was the ingredients were not cooked or roasted before hand.  Instead they were simmered in a pot after blended into a slurry.  Once cooked down, the shredded chicken was then added and allowed to simmer in the sauce before topping the tostada.  This simmering created a rich full flavor meat.  Spread over a layer of refried beans and topped with creamy Monterrey jack cheese, crisp lettuce, a slightly firm avocado, and a heaping spoonful of red salsa, the tostada was everything the video made it seem.  The only thing that would have made the tostada better was to have been made with a fresh fried thick corn tortilla like the video showed.  This thick tostada would have allowed for the heft of the beans, chicken, and toppings.  Store bought tostadas are meant for cheese only.  They are wimpy when stout is needed.  Delish.