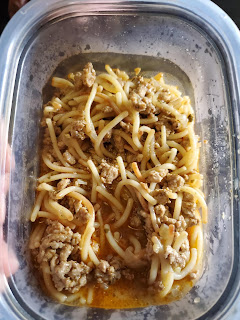 Immediately after having discovering the meat ingredient in Fideo can be substituted with pork or chicken instead of beef, it was decided all three variants would be tested against each other.  Just because beef was the standard does not mean pork or chicken won't be just as good.  Lentil tacos are not beef tacos but they are good all the same. Last night was beef, tonight it is Pork Fideo Delicioso.

Scaled for Likability: Good
There was two things wrong with Pork Fideo Delicioso.  One it was not beef and two it was oily.  Even after the pork was drained on the towel it too oily.  Would it be eaten again if there was no more ground beef to be had?  Yes, but it would have to be modified in the cooking procedure to ensure a less oily outcome.  Guess I should have stuck with the other proverb: if ain't broke, don't fix it.