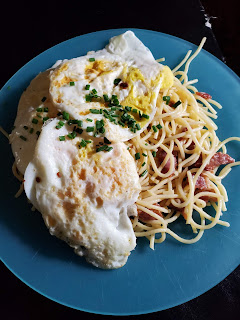 "I don't really like spaghetti", said no person ever.  This table and all its counterparts love spaghetti. Some more than others as I won't eat it for breakfast as leftovers or even made fresh.  There is something about the smell of tomato sauce in the morning I do not find appetizing.  None at all.  The teen prefers it without veggies.  The third is happy so long as it has standard spaghetti noodles, not spirals, elbow, shells, any thick version.  And while happy to eat it for breakfast it must be warm, not served cold.

With or without bacon.  Wait, what?  No.  Bacon is not a spaghetti ingredient.  Pancetta, sausage, ground meat.  Bacon, no.  This is so true until thumbing through my friends endless collection of food magazines and stumbled across a bacon infused spaghetti served with a fried egg on top in a Rachel Ray Magazine from the end of last year.  It really was the picture that did me in as the ingredients and instructions seemed leery.

Unfortunately, I cannot find the picture of the recipe nor the recipe on any of Rachel Ray's numerous sites.  I did, however, find a link on the Food Network for Bacon and Egg Spaghetti that was almost identical.

Modifications Made:
The recipe I followed only varied from the above link in the sauce.  Once the pasta was done, a few splashes of bacon fat was infused into the pasta water, noodles, and Parmesan cheese for added bacon flavor.

The only modification I made was to use 8 slices of pepper bacon not six of plain.

Scaled for Likability: No, Thank You
Should have stuck with my rule, no spaghetti for breakfast.  Even if the Breakfast Spaghetti is served for dinner and does not include tomato sauce.  We really did try to eat it.  The bacon was picked out and the eggs were eaten with a few extra served on the side.  Bacon infused cheese noodles?  The chickens loved them!