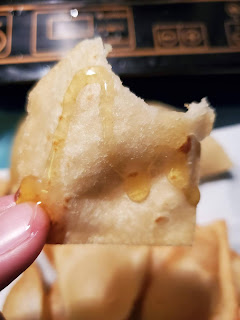 One of the best things about eating tostadas is the all ingredients.  It contains a bread, a starch, sometimes a meat, lots of veggies, and a dairy.  Tostadas are an all encompassing meal in one perfect disk.  What is even better about tostadas is afterwards there is always room for dessert.  What better way to round out an almost healthy meal?  Sopapillas!!!!

If you have never had a sopapilla then you have not lived.  A recipe is not really needed as they are just a flour tortilla sliced in fourths, deep fried to golden perfection, and then drizzled with sweet honey.  However, if you need one, Sopapillas with a Side of Honey is a perfectly written example of these warm, puffy treats.

No to the cinnamon and sugar.  This is not toast.  There is not butter.  These are not bunuelos.  Bunuelos are a whole other deep fried goodness.  The differences between the two are huge, night and day.  You can read more about them here.

Scaled for Likability: Great
Are these the as good as the homemade versions.  No but they are good all the same.  To say they are as good would imply that homemade brownies are as good as those plastic wrapped versions with the colored sprinkles.  You know the kind, the ones in the cardboard box marketed for lunch boxes and can sit in your pantry for months and month.  Yeah, no.  These are not as good as homemade but they are worlds better than those fake plastic wrapped brownies.  In fact, I would argue one could not tell the difference between the two when given a taste test.  In fact, this will have to be done the next time homemade tortillas are made.