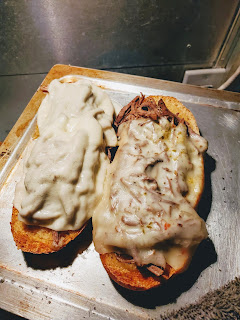 On cold winter days soups, stews, baked pasta dishes are staple meals.  They warm the house when cooking and warm the soul when eating.  Some days soups are perfect stand alone meals. Then there are days when you have worked extra hard and the soup needs to be paired with a savory toasted sandwich like a Hot & Spicy Italian Drip Beef.

Modifications Made:
The local grocery has their own brand of house foods.  Some are more popular than name brand, others not.  Petite diced tomatoes are one of those hot tickets items and come in a variety of flavors.  Tomatoes for the recipe were flavored with olive oil and peppers.

Having made many The Pioneer Woman meals in the past, I am familiar with her level of heat on dishes.  Hot cherry peppers were left out as the teen counterpart is not a fan of super spicy food but 3/4 jar of pepperoncinis instead of half were added instead.

Scaled for Likability: Good
Not as good as The Pioneer Woman's Dr. Pepper Pulled Pork Sandwich but still very tasty.  What the Dr. Pepper Pork has that the Italian Beef Drip didn't was sauce.  Upon several hours of cooking to break the meat down fully, the resulting shredded beef was flavorful but lacked enough sauce to soak the bread.  Instructions say to serve with dipping sauce but there was not enough to serve for one sandwich much less five or six.  The meat was moist but when ladled onto the bread, topped with cheese, and baked until toasty brown and melty, the meat became dry.

Unlike most recipes, the bread descriptive was general.  "Griddled rolls" turns out to not be the case on what bread was needed for the sandwich.  Rolls are generally soft to allow the user to soak up good stuff.  The softness of the meat and the creaminess of the cheese needed a strong crunchy bread.  This sandwich needed heft.  A ciabata, french, or dutch.  Not soft fluffy rolls.

To make this again, I would double the stock/seasoning portion of the recipe, serve it over crunchy bread, and top it with cold pepperoncinis slices.  I wouldn't necessarily call it beef drip but more like shredded beef - Italian flavored.  Good all the same, just needs some adjustments.