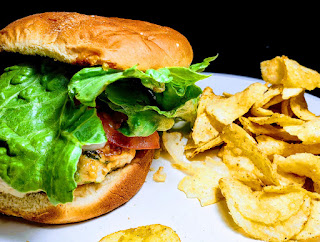 Don't really know how this has happened but it has been more than two weeks since a burger has been eaten.  Two weeks!  This coming from a person who ate at a local burger joint for years and years and years for four (okay, maybe five) days out of seven either for breakfast (yes, they serve burger for breakfast!), lunch, or dinner on busy nights.  Sometimes even twice a day.  What can I say, I enjoy burgers almost as much as tacos.
One this blog, it has been more than two months since a new burger was attempted.  Completely unacceptable.  To end this long streak Jalapeno Pepper Jack Chicken Burger was made.  And to date, I think this is my favorite new burger and the reasons will shock you.

Modifications Made:
The recipe made six to eight burgers as written. Divided in half produced three very nice 1/3 lb patties.

Chicken Patties:
Yellow onion was diced and then diced again, then sprinkled with salt to mash down and diced again.  Why, you ask?  I don't like the taste of raw onions and I don't like onions in my burgers at all.   This addition of salt allows the onions to breakdown to create almost a paste of which can be fully incorporated into the ground meat. Shredded cheese does not bode well in a burger.  Cubed cheese on the other hand works perfectly as it is less likely to crumble out of the meat and creates nice cheese pockets within the burger itself.

Garlic Mayo:
With no time to make roasted garlic mayo as this was a last minute meal, Garlic Aioli was used instead.  I would like to make a roasted garlic aioli with lime juice to compare the non roasted.  Who, knows maybe the extra work really is the cats meow.

Guacamole:
Simple guacamole was required here not elaborate with salsa or pico de gallo.  One avocado was roughly mashed with salt and lime juice only.

Scaled for Likability: Great
I said this the first time I made garlic aioli and I will say it again, who knew mayo could taste so good!  This burger is great without the mayo but becomes WOW with the aioli.   Unlike the garlic chicken burger made back in November, this burger was spicy with loads of textures and taste.  They are both great burgers but on two different spectrum's.  The simple vs the sophisticated.  What a great new burger after two long months.  Now, to the next new burger....