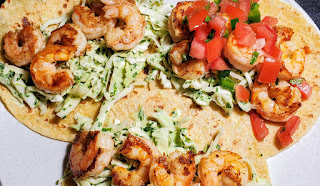 Have I mentioned my love of tacos, yet?  If not, let me say that I love, love, love tacos.  Tacos for breakfast, lunch, dinner.  Soft, crunchy, flour, corn, a mix between the two.  As a child when I would spend an extended time at my very formal, rigid grandmother's house, she would take me to get take out once.  I always pick bean and cheese tacos from a local taco shop.  She'd complain the entire time in her quite non aggressive way but she'd buy me two anyways.  The complaints were always the same; tacos are not food and two tacos are not enough to fill a bird.  This coming from a woman who take a standard sliced bread sandwich with one slice of cheap lunch meat and one slice of cheap American cheese and feed herself for three meals.  Three!  Well that was more than forty years ago and I still love tacos.  Just like these Shrimp Tacos with Garlic Cilantro Lime Slaw.

Modifications Made:
Sauce: Omitted green onions and replaced with 1 teaspoon of onion powder.  Zest of one lime was added as limes were not very juicy.

Tacos: Tortillas were a combo mix of corn and flour.  They are prefect for meals like this where the heft of flour is needed with the taste of corn.  Cooked on a cast iron skillet, they develop nice toasty edges while remaining soft and pliable.

Scaled for Likability: Great
There wasn't enough.  It is not that the recipe did not serve four people because it absolutely did.  Each taco had four to five shrimps each and more slaw than the tortilla could hold.  The problem was the table and all of its counterparts were starving and these were dammed good.  So much for lunch tomorrow.  Spicy, tangy, crunch with chew.  Perfect. Perfect. Perfect.