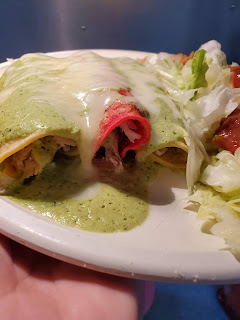 What's in a name?  A lot, really.  Depending upon where your are located it can cause others to look at you oddly and result in you ordering something you did not want.  Soda vs pop, soda vs coke.  Lemon bread vs lemon loaf.  Enchiladas vs burritos.  In these parts of the world a soda is a never a pop and if you ask for a Coke the askee will inquire as to what kind.  Lemon bread is an actual braided bread with lemon curd in the middle, sometimes with cream cheese, sometimes not.  Lemon loaf, the kind served at Starbucks, comes sliced from a 8x4 bread pan.  And while all of these can be easily confused and understood, enchiladas ARE NOT burritos.  NOT EVER.  Enchiladas are always made with corn tortillas, burritos with flour.

So yes, these white chicken enchiladas looked delish, there was some definite room for changes.  One could even say the recipe was more of a guideline, a starting point to something better.

Modifications Made:
Left over shredded chicken was seasoned with garlic, chili powder, and comino and set to warm in the microwave for five minutes or until the chicken was piping hot.

For the poblano cream sauce, the pablano peppers were roasted over the gas stove as directed to remove skins.  Once seeds and stems were cleaned out, the pepper, onion, flour, stock, sour cream, comino, salt and pepper, along with a dash of lime juice and a handful of cilantro were blended in a mixer till smooth.  The puree was then cooked in the melted butter until sauce thickened to desired consistency.

Corn tortillas were warmed in a damp towel in the microwave.

Chicken filled corn tortillas (no corn) were placed seam side down on a microwavable plate.  Poblano cream sauce was poured to cover the entire enchilada and shredded Monterrey jack cheese was placed on top.  The enchiladas were then warmed in the microwave to melt the cheese as all other ingredients were already hot, hot, hot.

Scaled for Likability: Good
After now having pureed two sauces, it has come to my attention that in order to produce a smooth, clear sauce the puree should be strained.  Strained puree removes any fibers within the sauce and reduces the froth from blending.

Poblanos are a hit and miss with heat and these were so mild they were almost sweet.  Next time poblano cream sauce is made, one small jalapeno will be added along with 1 teaspoon of garlic.  Both of which will offset the creaminess and provide a bit of spice.  Otherwise, the sauce was a good alternative to a verde sauce.