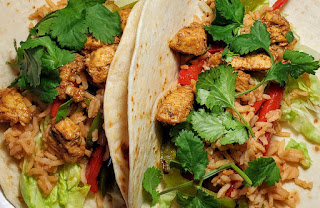 A couple of weeks ago, Chicken Alfredo was made.  In that post I mentioned how the BBQ pit is hardly ever fired up as it takes too long with fire wood.  Tonight for dinner, fajitas were wanted.  Yummy, fajitas.  Tacos, grilled meat, salsa, cilantro, lime juice, pico de gallo, cheese sauce, yada yada yada.  Want in one hand, get in the other.

One, there were no premarinated fajitas in the freezer.  Another fabulous creation from the same local grocer where the canned tomatoes are purchased but none were available for emergency fajitas.  Two, it was already after 4pm when dinner was started.  Normally 4 pm is plenty of time to start the BBQ if we were in any other season but dead of winter.  In less than 45 minutes it gonna be dark thirty.  Drat.

Still wanting fajitas, I did what most of the rest of the country does for fajitas, skillet fried.  Easy Chicken Tacos made it sound easy and tasty.

Modifications Made:
With time to spare for dinner, the cubed chicken was allowed to marinade in the seasonings for about 30 minutes or so before skillet frying.  Marinade time meant there was time to cook Spanish rice and brown up some red bell peppers and yellow onion to accompany the fajitas.

Scaled for Likability: Good
Ehh, they were not, not fajitas by any means.  They were more along the lines of Mexican flavored stir fry chicken and would have been good if the chicken was going to be placed inside enchiladas, a casserole, a soup.  Anything but a taco.  No wait, that's not true.  The marinade was good and it would have made a great shredded chicken taco.  Had the meat not already been cubed, I would have shredded it for the second round of tacos.