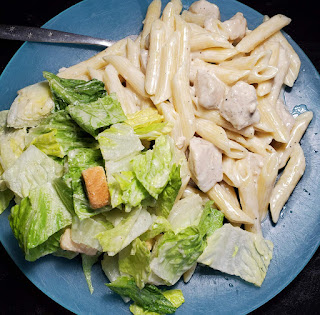 In a world full of food blogs, food vlogs, food magazines, food channels, food feeds on social media it is hard to know where it is best to spend your time.  Feeds never show the same channels, magazines are filled with ads, food channels have to many commercials and the show you want to watch is never on anyways.  When a new feed or vlog or blog is discovered I become addicted and find myself watching and reading it exclusively.  This is how I stumbled upon a video feed by Sam the Cooking Guy making Old School Chicken Alfredo.  On his website looking for the recipe to match the video I found Chicken Fettuccine Alfredo.  Between the two, I created a Real Cream Chicken Alfredo.  Another first for this table as all alfredo meals before came from either a jar or a package.

Modifications Made:
Chicken:
Would have loved to cook this on a grill but as I only have firewood grill, I could not find the energy to start a fire for less than 15 minutes of cook time.  When the BBQ pit is used around here it is for things like burgers, brisket, and pork legs. Chicken was marinaded as in the video then cut into chunks and followed the website instruction were then followed.  This method allowed for the spicy heat of the video instructions but the ease of the skillet of which the sauce would then be made in on the leftover tidbits.

Alfredo Sauce:
Per the video instructions, everything was doubled as he only made enough sauce for 1/2 pound of pasta and a whole box is needed for this table.  In case you don't want to watch the video which I highly recommend for a good laugh and a new twist on bland cooking shows, the ingredient list as stated on the video is 1/2 stick butter, 1/2 cup cream, 1/2 cup shredded Parmesan cheese, 1/2 pound noodles.  Per the comments on the website instructions, 1 teaspoon of crushed garlic was added to the sauce while the butter was melting.

Did not have fettuccine noodles so rigatoni was used instead.  Its rough tube shape allowed for plenty of sauce both inside and outside the pasta.

Scaled for Likability: Great
I may not be a spaghetti kinda of person for breakfast but homemade chicken alfredo is all together another story.  When watching the video, reading the website, and comparing to other recipes I was a little hesitant the sauce was going to be too rich, too milky, too buttery, lacking in flavor.  It was none of those things.  Like the video says, I would not want to eat this everyday as it highly, highly fattening but oh my word, oh so yummy.  Even better was how stupid simple it was to make it.  And because there is cream left in fridge, I can foresee this being made next week for lunch.  Or breakfast.