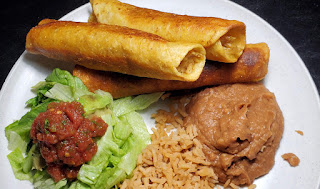 Last month, almost to date, chicken taquitos were the new meal.  Flautas/taquitos differ only in tortilla, one is a flour, the later is corn.  They are both delicious but I prefer corn tortillas over flour. The teen counterpart requested flautas tonight to have as a comparison to taquitos.  You know, kinda of like Coke vs Dr. Pepper, mustard vs ketchup on a corn dog, chocolate vs dark chocolate.  Don't know which one is better until you have had them both.  So with my detest frying foods, chicken flautas were made tonight using the exact same ingredients and procedures as from the taquitos only swapping the corn tortillas for flour.

Scaled for Likability: Good
Well, it was like I said in the taquito post, if I want fried flour tortillas, then I want them in the form of sopapillas served with not cinnamon sugar but with honey such as these found here or my quick and easy version made a few weeks ago.

Flour tortillas wrapped and then fried are always oily.  I have never had a flauta that did not leave an oily residue when eating without toppings.  Sure, sour cream, refried beans, or guacamole will disguise the oily film but only if you like flautas with toppings.  Still good, however, I just prefer corn tortillas over flour, Coke over Dr. Pepper, mustard to ketchup, and always, always dark chocolate.