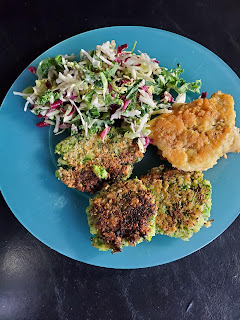 Social media feeds are full of recipes trying to push off cauliflower as taters, rice, bread, pizza crust, crackers, bang bang, sesame, and Parmesan cakes.  Broccoli as pancakes, chips, bang bang, tater tots, pesto, and Broccoli Fritters.  Maybe as Americans instead of cutting out all these tasty items such as chicken Parmesan or bang bang shrimp, we learn to eat less.  Eating 1/2 pound shrimp per person, really?  Or maybe we try just to eat less meat and incorporate more vegetables in general.  Nothing wrong with broccoli fritters alongside a serving of salad and a small piece of pork chop  Small, less than half.  Not two or three.  But hey, that just me, what do I know?

I know when these broccoli fritters sounded fabulous.

Scaled for Likability: Good
Next time; yes, they were that good that they will be served next time; next time one tablespoon of onion powder will be added, one teaspoon of garlic powder will replace the fresh, and the broccoli will be cut smaller.  When cooking the patties will be flattened more so they remain crisp with no soggy middle.

I would also like to try them baked.  Instead of adding the cheese into the patty, when baking the cheese will be added to the top to create a extra crispy layer.  A much needed crunch.  If baked very thin, they would be great dipped in ranch dressing.  In my head, they are going to be fabulous.

Finally, did you notice the half deck size portion of pork chop?  Between the salad and the fritters, the pork chop was saved for another meal.