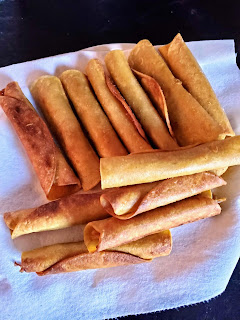 Flautas/taquitos differ only in tortilla, one is a flour, the later is corn.  They are both delicious but I prefer corn tortillas over flour.  If I want fried flour tortillas, then I want them in the form of sopapillas served with not cinnamon sugar but with honey such as these found here.  Which reminds me, I have not made sopapillas in years and am gonna have to introduce these sugary puffs of heaven to the teen counterpart. Anyways as I was saying if I have to chose flautas vs taquitos I would rather taquitos. Setting aside my detest for frying foods, Chicken Rolled Tacos with Avocado Salsa was too tempting to not attempt.

Modifications Made:
The video was more complicated than the actual recipe.  Three chicken breast were boiled in seasoned chicken broth until cooked.  Seasonings were one teaspoon each of garlic, comino, chili powder, onion and one cube Tomate de Pollo.  Once cooked, the breasts were shredded and returned to the broth to cook until water evaporated further infusing the seasonings into the breast meat.  Unlike the video, corn tortillas were used not flour but the same cooking method was followed.  Upon placement of taquitos on paper towel lined cookie rack to dry, a sprinkle of salt was dashed across both sides.

Scaled for Likability: Great
It is a good thing that I despise frying foods as much as I do otherwise I could see taquitos being added the menu rotation way to often.  With that being said, they are for certain be added to the T&T recipe list, just not the weekly or monthly schedule.  Served warm, not fresh out of the grease, with sour cream, avocado cream sauce, guacamole, and salsa.  Delish.  The only modification I would make for the next attempt to lessen the amount of chicken added to each tortilla.  These were too fat and the ratio of chicken to crunch was out of proportion.  Can't wait till next time I have leftover shredded chicken!