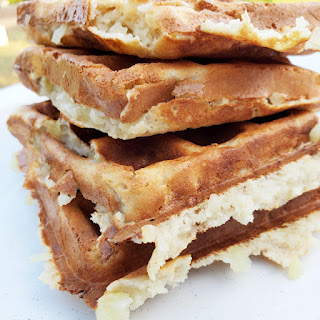 Can you believe it has been almost two months since waffles were made? Two months! Not that there hasn't been attempts, it is just that life gets in the way sometimes.  You know, best laid plans and all that.  In fact I have had Oladi (Russian Kefir Apple Pancakes) on the menu for three weeks. Why haven't they been cooked, you ask? Mostly it goes back to what was stated yesterday, it is too hot to cook, too hot to eat. And waffles/pancakes about as hot as it gets. With freakish cool winds for the past two days, I decided to take the plunge and make waffles for dessert. If I could just get through making them, eating outside in the cool gentle breeze would be worth the effort. SPOILER ALERT: it was!
Modifications Made:
Per the instructions, kefir was substituted with yogurt and milk. Specifically 5 ounces of Silk Almond Soy Yogurt and 1٪ milk to make up the difference.
To add a hint of texture and to reduce the amount of boring ap flour, 1/2 cup of oatmeal flour replaced 1/2 cup of flour. Besides apples and oatmeal are like peas and carrots, two peas in a pod, rainbows and sunshine, etc...
As the Gala apples were not very sweet and waffles were to be eaten plain (yes, as in no additional syrup or toppings), the sugar was doubled to four tablespoons.
Not ever having made apple pancakes or waffles, the apple to flour ratio was reduced. Only one and half apples were used (approximately 3 cups). Being the apples were going to be used in the waffle maker instead of as pancakes, the apples were diced into very small pieces. About the size of a number 2 pencil eraser or a dried pinto bean.
Scaled for Likeness:  Great
When tasting the batter, the initial response was bitter followed closely by soy yogurt. Once cooked the apple kinda melted into the batter becoming one with the mixture yet retaining some texture. It was the perfect mixture of the tender apples, fluffy batter, and crunchy outside.  Unfortunately the batter only made 7 square waffles, one of which was not full. Another recipe to add the T&T list.