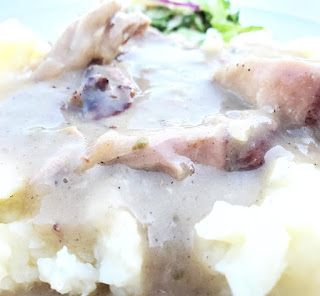 There is nothing more wasteful than leftovers gone bad.  How to turn leftovers into new meals is the goal.  Being I despise leftovers, for the most part, this is always a troubling concern.  One of my tricks is to freeze meat products straight away.  Once in the freeze, there is time to plan and scheme.  Like this BBQ Pulled Pork and Gravy.

Scaled for Likability: Good
When cooking the meat in the gravy my only concern was the outside of the meat containing the BBQ crust would turn the gravy into a BBQ flavor.  To eliminate this too BBQ flavor, most of the dark crust was removed.  It was a good plan. The gravy had a hint of smoke, the meat was very moist and tender, and when served over extra buttery mashed potatoes it was yummy.