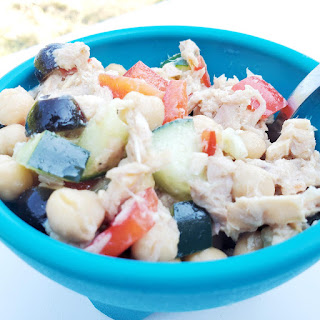 It's so bloody hot. Hot winds, hot sun, hot humidity. It's too hot to cook, too hot to eat.  "Cold" dinners are always salads, cereal, sandwiches.  Just making these in the hot, hot kitchen cause sweat to bead up.  Days like this need a dinner prepared first thing in the am and ready by dinner..  something refreshing, cool.  What better way to cool off than with a nice cold Mediterranean Tuna Salad.
Modifications Made:
Albacore tuna is a trend in food because it's healthier than regular tuna. It's also more expensive, dry, and lacking in flavor. Instead of plain albacore tuna, the recipe was split. One can albacore, one can regular. Not three cans, but two and both in water not oil.
Red onion was omitted nor was it replaced with any other onion. Parsley was omitted. Grapeseed oil replaced olive oil. Only 1/2 of lemon and lemon zest were used.
One cucumber is vague as cucumbers are all different sizes. The current cuc in use was over 16" long. It didn't even fit in the crisper drawer. Using the red bell pepper as a basis, I matched the cuc to the amount of pepper. Roughly about one cup each.
Scaled for Likeness: Great
Not only was this meal tasty it was super quick and easy to make. The whole ensemble took less than 10 minutes make. It was refreshing, cold, and had a wonderful mixture of textures. Best yet, it paired well with chip and salsa on the side. Not quite a T&T meal as I would not want to eat this in winter but it will be served again before summer's end.
But....
There is always a but.  This non mayo tuna salad was everything I was hoping it would be. However, not even with the third can of tuna it would not serve 10 people.  As made it barely served three people, one who is an non eating teen table counterpart.  If it had not been for chips and salsa there would have been fighting for the last half cup serving. Luckily, dessert had already been planned so leaving the table with a slight hunger was okay.  Mediterranean Tuna Salad is good the recipe needs to be doubled so there are leftovers for lunch.