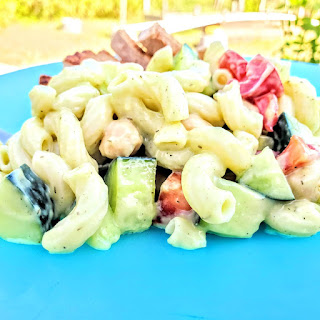 The table counterpart found a picture of a recipe that sounded good for these hot, hot days.  Only after finding the actual website the recipe came from did it come to light the pasta dressing was avocado base.  Guess the title should have gave it away: Vegan Avocado Pasta Salad Oh well, I was giving it a go anyways.
Modifications Made:
Sauce: dijon mustard replaced horseradish, dill was omitted, lime juice and finely diced white onion were added.
Salad: one can of chickpeas were used instead of three cups, and red onion and cherry tomatoes were omitted.
Scaled for Likability: Good
Made hours before dinner was served the salad had ample time to meld in flavor and become thoroughly cold. Veggie combinations offered both crunch and chew along with fiber and protein making it filling.
Leftovers were served the next day with a small piece of pork chop and while the flavor was still good the pasta was already becoming runny meaning this salad would not make a great picnic dish unless served the same day.
Other veggies such as corn, radish cut into chunks, and soy beans would have been a great addition to the pasta. It may not be a nectar day dish but it is very versatile in flavor.