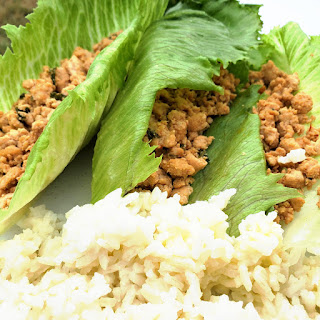 Needing a braces friendly dinner as the teen table counterpart is still yammering on and on and on about tender teeth, Spicy Chicken Lettuce Wraps with white rice seemed like the perfect meal. Best of all, no additional ingredients were needed and it was 30 minutes or less meal.
Modifications Made:
Brown sugar was left out as the past two Asian dishes were just too sweet to eat. Since the meal was ground chicken tossed in a sauce, removing sugar was not an option and adding extra soy sauce was not option either as the dish would be too salty. Better to add sugar as an after sauce in the form of sweet Thai chili sauce than toss the whole meal out.
Scallions were replaced with 5 sticks of green onions, both the white and green parts.
The cooking order was also changed. Chicken meat was browned with no additional oil, onions and sauce were added along with 1/2 cup of water. Meat then cooked in sauce until water evaporated on low heat.
During the simmering of the meat one cup of white rice was cooked with no salt as the dish should contain plenty of salt.
Scaled for Likeness: Good
Just one word: SALTY! Oh my word the meal was so, so salty. Served alone or in a lettuce leaf the meat was so salty it could barely being eaten. Luckily plain white rice saved the day. Once the meat was mixed into the rice and reserved on a lettuce wrap, it was completely edible. Plain white rice, hero of the day.
If made again, and I might because it was good and simple, the meat would be browned, the sauce, 1 cup rice, 2.5 cups water would be added and cooked until rice is desired texture. In fact to help reduce the salt, the fish sauce will be eliminated as one tablespoon has over 1700 mg of salt. Yikes!