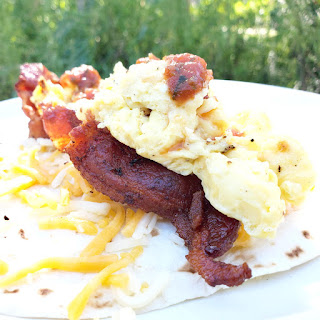 Tacos! Have I mentioned this table's love for tacos? Breakfast tacos, lunch tacos, dinner tacos. With or without meat.   Corn/flour/spinach/corn flour/and occasionally grain tortillas. The only tacos not partaken in are dessert tacos.
The thing about tacos is wording. The same two ingredients can produce two different tacos depending upon what was started first.
Potato & Egg: fried potatoes in scrambled egg
Egg & Potatoes: scrambled egg with fried potatoes on top
Bacon & Egg: bacon bits in scrambled egg
Egg & Bacon: scrambled egg with a bacon strip on top
The local taco joint offers both types of bacon. Bit tacos have a soft texture. Strip tacos maintain their crunch.  Bit tacos are cheaper than strip tacos. If strip bacon tacos are desired they are made at home. Especially since two bacon strip tacos with cheese are even better than one. Seriously, are you seeing this taco?
The only thing missing that is available from the local taco joint that was not on this taco was the homemade tortilla. Homemade tortillas are the cats meow.