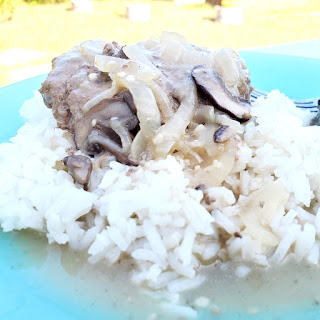 One my most favorite meals at school was the hamburger steak with gravy and taters, served with green beans and a roll. Hamburger Steak & Onion Gravy seemed like a fancier version of school lunches.
Modifications Made:
Fresh garlic replaced powder and 1/2 bunch of mushrooms were sauteed alongside the onions.
Scaled for Likability: No, Thank You
The meat was tender and moist, the mushrooms and onions offered the perfect sweet offset to the salty gravy.  If only the meal could have been rated at that.  But alas the gravy was runny and anemic.  Having read and re-read the instructions, there was a clear and definitie missing step in the flour gravy department.  They only way to achieve such a dark gravy was to make a dark roux.  This cannot be achieved with onions and mushrooms still in the skillet.  Gravy aside, the meat was tasteless, plain, and too thick.  Thinner patties would have helped create a better gravy infused flavor but the meat should have had double the seasonings.