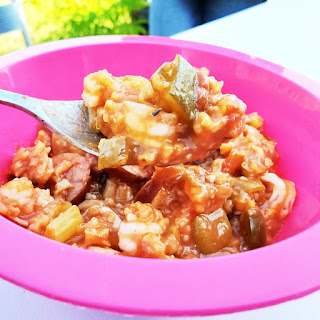 As mentioned yesterday, last night's dinner of Vegetarian Jambalaya made a mountain of food. With enough leftovers remaining for an entire meal, I decided to upcycle the jambalaya into something more along the lines of what we are used to seeing and eating: shrimp and lumps of crab meat.  Unfortunately, crab meat could not be found at the store.

Modifications Made:
While leftovers where reheated in the microwave with a cup of water added to loosen up the contents, one pound of fresh Gulf shrimp were peeled, deveined, diced into bite size chunks, and boiled until done.  To enhance the flavors of the jambalaya, shrimp were boiled in just enough water to cover all shrimp and the water was heavily seasoned with Tony Chachere's Original seasoning.  So much seasoning, the water was red.

Scaled for Likeness: Good
Say NO to tomato paste.  What was manageable yesterday was overwhelming today.  It was not as though the dish tasted like spaghetti or anything, it just further away from what we are accustomed to eating.  The dish today lacked all the spiciness of Cajun/Creole foods, the slight vinegar hint (think Louisiana Hot Sauce), the combination of all meats (chicken, seafood, sausage). Addition of shrimp was nice, but it was not the same as if the shrimp has been cooked in the original mixture to fully incorporate the seasonings.  There was definite room for improvement of this recipe.