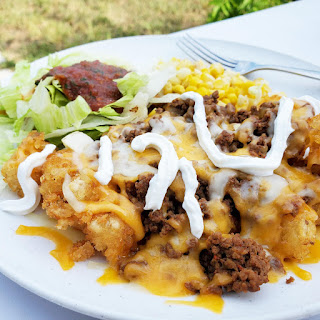 A few months ago I saw a banner at a Sonic Drive-In stating "now serving Totchos". Up until last weeks failed attempt at tater tots, I had forgotten all about Totchos. I'm not sure what Sonic's Totchos taste like but what I can tell you is mine were better!
Modifications Made:
According to Sonics website, Totchos are "crispy, golden tots layered with creamy cheese sauce, crispy bacon pieces, diced onions, and spicy jalapenos topped with zesty baja sauce."
My totchos were Mexican in flare. Tater tots deep fried, covered in taco meat and shredded cheese, topped with sour cream and guacamole (not shown).
Scaled for Likability: Great
As stated numerous times before its a good thing I despise frying foods otherwise Totchos would become a T&T meal. Served with lettuce and corn on the side, Totchos would be equally as great having been served over a bed of salad.. Totchos Salad with fresh chunks of avocado and sweet corn topped with spicy cilantro ranch dressing.