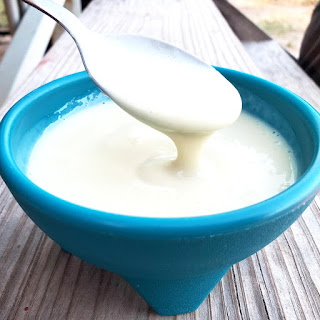 For those of you out there with a milk intolerance or choose to not drink it for whatever reason, hats off to you. I love all things milk: milk, ice cream, sherbet, cheeses of every flavor except blue, yogurt, pudding (vanilla, chocolate, bread), tapioca, waffles, oatmeal, alfredo, etc... In fact the only time I don't like milk in the dead heat of the summer.  It's just too hot.  Nothing says yummy like curdled milk in your stomach.  Therefore in the summer milk is limited and soy milk replaces cows milk. Soy is not milk but in waffles, cookies, smoothies its not noticeable anyways. Wanting to branch out and wanting something sweet for dessert, Vanilla Pudding (with Silk Vanilla Soymilk) was attempted. Never having made pudding before this was a whole new experience with a large learning curve to be expected.
Modifications Made:
Recipe followed as instructed.
Scaled for Likability: Fail
Pudding are a rich, sweet dairy based dessert. Puddings can be spooned with its shape retained both in the bowl and on the spoon. This excessively sweet syrup was not in any fashion pudding. So sad.